For more flexibility, Gamry Instruments provides you several ways to perform electrochemical measurements. You can choose from a variety of pre‑built techniques which are organized in specific groups in the Framework software. In addition, Gamry Instruments’ Open Source Scripting allows you to modify the experiment’s script source and to customize experiments.

For combining single experiments, use the Sequence Wizard. The Sequence Wizard has the advantage that you can create complex measurement sequences using a drag-and-drop approach. In this way, customized experiments can be executed consecutively without interfering disruptions.

Nearly all experiments of Gamry Instruments’ Framework™ software can be used in the Sequence Wizard. Additionally, different functions are included for control of the settings of the potentiostat, the electrode, and other devices such as the Auxiliary Electrometer and the Electrochemical Multiplexer ECM8.

Generally, the following categories are preinstalled on the Sequence Wizard:

In addition, optional software packages for different experiments can be installed:

Open the Sequence Wizard from the Experiment menu of Gamry’s Framework (Figure 1). The setup consists of two columns. On the left side are all usable experiments and tools, divided into subfolders. The right column stores the particular sequence you create.

To place single functions in a sequence, drag them from the left to the right column and drop them at the desired position. You can also double-click on a step to move it.

A third way is via the buttons on the bottom of the window. The plus

in a sequence. Change the indentation by left

arrows. In this way, you can assign single steps to loops (see below).

When you double-click on a single step, a setup window opens in which you customize all important measurement parameters.

Save your sequence with Save Sequence. The generated file has the ending *.GSequence, and can be modified again in the Sequence Wizard. With Save As Script, save a sequence as an Explain script. You can start an experiment without opening the Sequence Wizard again.

Initiate your sequence with Run Sequence. From top to bottom, each step in the sequence runs sequentially. By default, measurements are automatically performed with the first activated potentiostat.

Pause a sequence using the function Delay, represented by a clock

symbol. Place it between those experiments where a pause is required. During this period the cell is normally turned off. The sequence continues with the next step when the delay is finished.

Figure 2 shows the Delay window. Set the Delay Amount (and its corresponding unit with a radio button). In this example, a sequence pauses for 60 minutes.

Figure 2: Setup for the function Delay.

One of the most important tools for building sequences is the loop. In the Sequence Wizard, single measurements are executed consecutively. To re‑run a single experiment, or multi‑steps several times, loops are required. They can simplify the complexity of a sequence drastically. Loops in the Sequence Wizard have a green circular arrow

Figure 3 shows two examples to perform a sequence of eight consecutive electrochemical impedance spectroscopy (EIS) measurements in potentiostatic mode. The right sequence is expressed with a loop and the left without one. 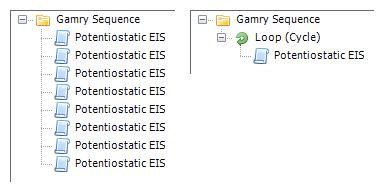 Figure 3: The same sequence without (left) and with a loop (right).

The example of Figure 3 shows that instead of eight steps only two are needed with a loop to execute this sequence. Using loops is more efficient with increasing complexity of a sequence.

In addition, parameters and the file name have to be customized for each single measurement if no loop is used. With a loop, parameters have to be set only once.

Both sequences shown in Figure 3 generate eight files for each potentiostatic EIS experiment. The loop number is automatically added to each file name if loops are used.

The Sequence Wizard has five different types of loops:

Figure 4 shows how to use loops within other loops. Figure 4: A sequence with a loop in a loop.

In this sequence, the outer loop consists of four different experiments. The first step of this outer loop is again a loop consisting of charge and discharge steps repeated for a given cycle number, or if an end criterion is reached, e.g., capacity falls below a set value.

When the inner loop is finished, a conditioning phase starts followed by an open-circuit potential (OCP) measurement and a galvanostatic EIS test. All steps of the outer loop are then repeated for a user-specified number of cycles.

Loop (Mux Channel) is a particular loop designed for use with our ECM8 Multiplexer. The multiplexer allows you to reads data from up to 8 different inputs sequentially. The Loop (Mux Channel) step gives you programmable control for starting your readings with a particular channel (1 through 8), and ending readings with a particular channel (1 through 8). Using this step, you can (for example) read data sequentially just from channels 4, 5, 6, and 7 (Fig. 5).

By including and modifying variables, you can transfer parameters from one step to other steps. In combination with loops, this is an appropriate way to perform complex sequences easily.

Figure 6 shows a sequence with several cyclic voltammetry (CV) tests. The scan rate is increased after each loop until a final value is reached. Functions for adjusting variables have the symbol

Figure 6: A sequence with modified variables.

The sequence starts with the function Define Variable.  In its setup the variable Name, Type (Potential, Real, or Integer), and Value of the variable are determined. Figure 7 shows the setup of this function.

In the next step of the sequence a loop is started which contains a CV experiment and the function for modifying a variable, Modify Variable.

At the end of each loop cycle the value of the defined variable is updated. The setup for the function Modify Variable is shown in Figure 8.

Select a Variable Name from a drop‑down list. It gets changed by a Modifier (addition, subtraction, multiplication, parity) and a constant Value.

The loop in this sequence ends when the selected variable reaches a defined end criterion. Hence we use the function Loop (Variable). Figure 9shows the setup.

Figure 9: Setup for the function Loop(Variable).

Select the previously-defined Variable Name from a drop‑down list. The loop end criterion is defined by comparative Operators and a final Value.

Finally, the defined variable has to be linked with the executed experiment, which can be done in its setup. In this case, the variable is the scan rate of the CV test. Figure 10 shows three sections of a CV setup.

Figure 10: Three sections of the setup for a cyclic voltammetry test.
For details, see text.

When you click on the gear-plus symbol left of the parameter,

In this example the variable is named VariedScanRate and it is initially set to 10 mV/s; then it is increased by 10 mV/s after each CV experiment. The total loop ends when a final value of 100 mV/s is exceeded. Ten CV files are automatically generated, each containing the actual loop number in its file name.

A complex sequence with several measurements like the example above can create a lot of files. The Sequence Wizard offers a function to store these files in one place: Group Data Files, with the symbol

. This symbol is also used for most experiments and functions which control the hardware and electrode settings.

Group Data Files groups all files that are generated in a sequence into one directory, or adds a precursor to each file name. Figure 11shows the setup.

You can define the name for a group or a precursor respectively. If runtime dialog is enabled, a window appears prior to the start of the sequence, in which each group or precursor name can be entered.

Figure 11 shows an example for a sequence that uses the function Group Data Files. It is placed before those steps which are supposed to be grouped. The function can be used multiple times in a sequence to create several groups. 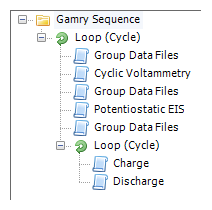 In the example of Figure 12, three different directories are created. The first one includes all CV experiments, the second contains all EIS files, and the third all charge and discharge files. The actual loop cycle-number is automatically added to each file name.

Using the grouping function, you can store measurement files in one place in a better organized way. Moreover, you can run repetitive sequences by changing only a minimum of parameters. That makes it especially interesting for multi‑channel applications, for only the group name is changed for each channel or device.

This application note described Gamry Instruments’ Sequence Wizard. By means of examples, the setup and the use of several sequence utilities were discussed.

Complex sequences of different experiments can be created with only few modifications, saving a lot of time in preparation and execution. Additionally, you can run multiple experiments without interruptions and external disturbances.