This protocol for studying the repassivation potential of a corroding crevice was first suggested by Tsujikawa and Hisamatsu in 1980 (Ref 1,2). Recent interest in very long service-life alloys (Ref 3,4) has rekindled interest. We became involved when a Gamry user asked us to prepare a special script to automate the testing.

Like the Critical Pitting Potential experiment (ASTM F746), THE Method involves a stimulation phase and a repassivation phase. The stimulation phase is a potentiodynamic ramp towards more anodic potentials. The ramp stops when the current reaches a critical threshold (20 µA/cm2), indicating that crevice corrosion has been initiated. The sample is then galvanostatically held at this current density for a fixed time (2 hours). At the end of this galvanostatic hold, the potential is measured. The cell is returned to potentiostatic control at this potential. The potential is then stepped towards the original open circuit potential in 10 mV increments.

During these potentiostatic steps the current is monitored. If the current continues to increase, that is the indication that crevice corrosion is continuing. If the current does not increase when the potential is held for two hours, then the repassivation potential has been reached. 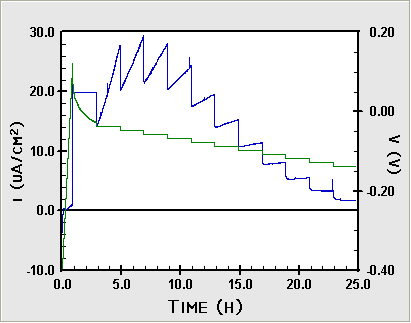 The THE Tecchnique is described in ASTM Standard G 192.  The THE technique is included with the Gamry DC105 DC Corrosion Technique Software.